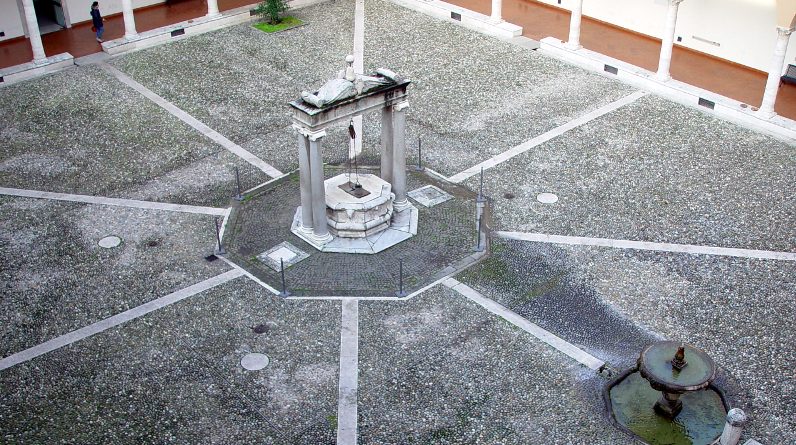 In the tetralogy “Joseph and His Brothers“, Thomas Mann states, “Deep is the well of the past...”. Sometimes this well is bottomless and it may appear far away and passed, yet all of our actions and everyday decisions come to life by its contents. It is the fundamental substrate, the raw material from which to draw the basic connections of our creativity.

The image of the well, used by Thomas Mann, is very significant. In symbolism, the well is the place where you take contact with the deep self and where to get water that gives life. The ancient times remind us of the socializing role of the well, invested with an aura of sacredness, where sharing with others took place. It was a kind of sanctuary that connected the depth from which life is born with the sky, the giver of light and wisdom. While overlooking from the edge of a well, you feel connected with an underground world evocating our most intimate part, in a matrix of infinitely extended sensations that accompanies every human work of creative transformation.

Nowadays, there is much talk of “creativity” although it would be more correct to call it “interpretability” or “capacity for change or transformation“. The original creative act, the supreme action where the form becomes from nothing, does not belong to the human sphere. However, history tells us of countless intuitive actions that have enlightened our path over the centuries and that – for simplicity – have been called “creative”, giving this term a much broader meaning. In truth, what we mean by “creative virtue”, the ability to produce with the intellect and the imagination one or more original ideas, represents a different talent: the modern “creative” uses – often unconsciously – his great interpretation skills of a structuring base of ancient experience from which – with the help of dazzling intuitions – he “transforms” and changes concepts and ideas, adapting them to the times.

The solidest and most significant change is made on the basis of strong and permanently implanted historical roots. Losing this basis can often mean losing any reference of balance and future direction.

This consideration applies to all spheres of human endeavour, even and especially in science. Over thousands of years of history that punctuate the life of man, such examples are very obvious. Our ancestors learned how to preserve and transport the fire and later to transform its energy to produce heat and power. When the observation of the behaviour of materials in the water has developed a growing knowledge base, the first boats were born. And so all the “inventions” made in the course of the industrial revolution are obvious results of this acute ability to transform the enriched knowledge resources. All of modern science and technology owe their success to their “Well of the Past.”

So also other areas such as human thought, politics, social sciences and art, express in their “creative” gesture the processing of an experience rooted in a solid foundation of historical knowledge and always present in the baggage of our species. Martin Heidegger stated that to understand the world, to recover our authenticity, we must return to those who thought about the world before Socrates; that is, to the origins of our amazement for the wonders of being.

Today we see both an expansion of the science research field and an ever-closer relation of physics with humanistic fields that were previously relegated only to thinkers and philosophers. It would be a great mistake to go back and separate again this knowledge into isolated areas. The structuring foundation of ancient human experiences represents a continuum that is constantly fed by all kinds of knowledge and that participates in all subsequent creative expressions with analog and intuitive approaches. How can the creation of a new technology not even consider its subsequent reflections on social, ethics and future generations? The physicist Carlo Rovelli wrote: “Our knowledge is incomplete, but it is organic: it continuously grows and every part has an influence on each other”.

That’s the main foundation of the “Science of Man” strongly advocated by the great anthropologist Gilbert Durand: the sharing of a knowledge that has man as the protagonist, aware of the complexity of his existence, who questions the meaning and purpose of his life, his placement in the Universe, the relationship between his short earthly life and the infinity of time.

Creating a fracture on this structuring basis on which man rests his existence, generates anxiety and uncertainty as well as the loss of any reference. The exasperation of today’s technology is a clear example of how such a fracture can easily be developed. The technology offers men the illusion of being able to liberate them from God, because they think they can get for themself what once was lived as a gift from the divine. The enfranchisement from the Gods marks the origin of technical knowledge, but what frees is also what binds (Prometheus). The philosopher Marshall McLuhan wrote that any new technology (including the wheel, the speak, the press) exerts on us a very powerful flattery, through which it hypnotizes us in a state of “narcissistic stupor“. If we do not have the proper intellectual antibodies (this happens as soon as we come into contact) we tend to accept the (not neutral) assumptions inherent in that technology as absolute axioms. “If we can avoid being engulfed, we can look at that technology from the outside with detachment, and at that point we can not only clearly see the underlying principles and the lines of force it exercises, but also the social changes become for us a open book, we can guess them in advance and (in part) control them“(McLuhan, Understanding Media).

Creativity really flows when we are linked to our deepest roots, the most deeply rooted knowledge structures, representing the most powerful tools to be able to “trigger” the process of developing a fruitful thought. A “creative” thought always arises from the transformation of a substrate of basic knowledge that (sometimes unknowingly) takes part in the process, and then becomes itself a base for the next one in a continuous transformation.

The ethnologist Jean Servier, in his work “The Man and the Invisible” wrote: “The true civilizations are precisely those, ancient or modern, Western or non-Western, which had as their goal to preserve and pass on from age to age the same certainties in the Invisible derived from the same teaching, from the same tradition”.