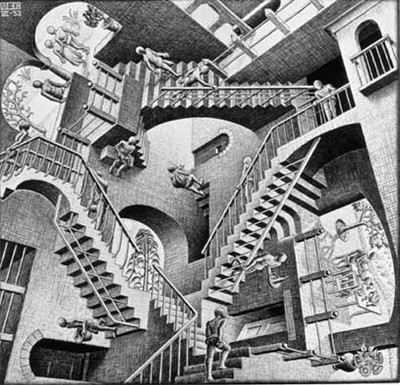 “They are filling old bottles with new wine!” This is what the physicist Werner Heisenberg heard exclaiming by his friend and colleague Wolfgang Pauli who, criticizing the approach of the scientists of the time, believed that they had been forcibly glued the notion of “quantum” on the old theory of the planetary-model of Bohr’s atom. Faced with the huge questions introduced by quantum physics, Pauli instead began to observe the new findings from a different point of view, from a new level of reality without the constraints imposed by previous theories.

Newton himself, once he theorized the law of the gravitational field,  failing to place it in any of the physical realities of the time,  he merely call it a “hidden force” rather than try to unlikely place it in current theories.

In the daily work of each of us, we often unknowingly find ourselves in the same situation. At the occurrence of a new problem, a difficulty, the need for a choice, it is inevitable to cope with them using known methods and knowledge. Sometimes, however, this approach does not lead to the desired results and in some cases may even reveal unwanted drifts.

It is often a matter of a wrong point of observation. Quantum physics has opened to the scientific world the issue of observation and of the level of Reality connected with it: what often seems impossible and inconsistent, it is allowed and not contradictory when viewed from a different perspective. A single level of Reality can only create antagonistic oppositions.

The reality, as well as any event related to it, is a complex and interconnected system. You can not grasp the meaning of a question with a reductive-disjunctive approach, but only expanding your views to horizons beyond the one on which you are focused.

C.G. Jung and W. Pauli would have never outlined and described the phenomenon of synchronicity if each of them had not deemed it appropriate to transcend the limits of their disciplines, physics (Pauli) and psychoanalysis (Jung), noting that any presumption of a casual link relationship between the synchronic events is absurd and inconceivable, despite all the physics of the time was based on rigid axiom of cause-effect.

An example is the simple relationship between the man and the tree. Let’s try to highlight the multiple and different levels of reality and perception with which this relationship can be described:

It is not always possible to perceive the different levels of reality associated with a particular and specific issue, due to centuries of cultural reductionism during which men have been faced with their everyday life. The reductionism tends to “separate” the problem in its elementary parts to better understand it, but this view – in the modern and interconnected world – introduces forms of restrictions, narrowing the view. Instead, you must “expand“, rather than reduce, in order to fully capture all the elements of your problem.

And this expansion can only be achieved with a form of transdisciplinary approach to the issue. The purpose of transdisciplinarity is to restore, re-establish the unity of knowing, through the awareness that all forms of knowing is complementary in the achievement of a common and complex reality.