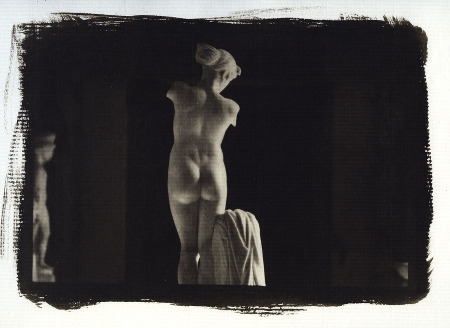 The works of Lorenzo Scaramella always surprise even those who have been following his artistic research, due to the intense expressiveness which he achieves through ancient printing techniques.

At this time of crisis in the Western world, a spiritual crisis, the crisis of the life force (of which the social, political and economic crisis are not more than superficial aspects), we feel the need to contact the Beauty, that Dostoevskijan ‘beauty that will save the world’ and that is precisely the Greek kalokaghathia that Scaramella has been able to see with the eyes of the soul in Greek and Renaissance sculptures and who revived with extraordinary artistic power and creative technical skill.

From his words: «We are used to say “the subject of the photo is…” but the photographer is also “the person who photographs”. We are, in short, in front of a single action with two subjects. Couldn’t this suggests us that some connection – albeit hard to describe –  will establish between the two in the act of taking a photo? The photo is due to the space around us, which by convention is Euclidean: each event can be described by three coodinates,(…) but also in the picture there is a “mysterious” coordinate: Time.

In the first stage of the idea there is the shot, followed by the processing during which the film blackens: the lights turn black, the subject is reversed, it is the phase of “black light” depicted in the Melancholy of Durer; this phase can be assimilated to the alchemical “nigredo”. 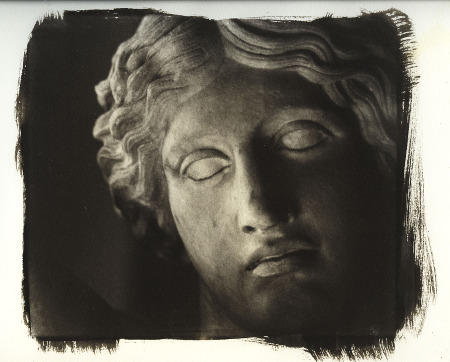 When printing, the work of man leads to the reversal of the negative and what was dark becomes light: it is the “albedo” stage; and the more a dark area was, the more it becomes bright in the print, as if to signify that in the darkest parts often conceal the most clear and bright ones».

Lorenzo Scaramella takes pictures of statues, statues of gods, angels, poets and emblematic figures. His photographs, printed using refined ancient techniques, give off an aura full of charm that reminds us of the history of this means of documentation and expression. He prints his photos with a variety of techniques now hidden because they were developed in the nineteenth century and later abandoned as not suitable for mass production. So he gives us the pleasure of seeing the expressive nuances that can be obtained for example with the press on salted paper, platinum, gum and gelatin-silver. With the eye of a master together with his multi-purpose technical hands, Lorenzo Scaramella creates unexpected and memorable aesthetic effects.

Recently, his works have landed on Saatchi Art, the online version of the prestigious Londoner Gallery in King’s Road. At the time (November 2015) it is possible to purchase limited editions of the following works (by clicking on the titles you can access related Saatchi Art’s page):

«The artist must act at all times: at the beginning with the shot, by identifying what should be white, gray or black. Then during processing of the film, to monitor and take action so that the blackening is right and finally in printing to draw conclusions and give all areas their rightful place in the overall weight.

Perhaps this is the most “rational” part of the process».