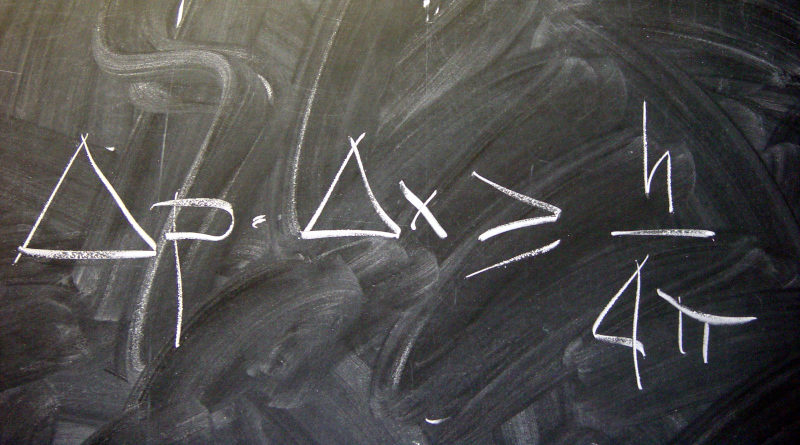 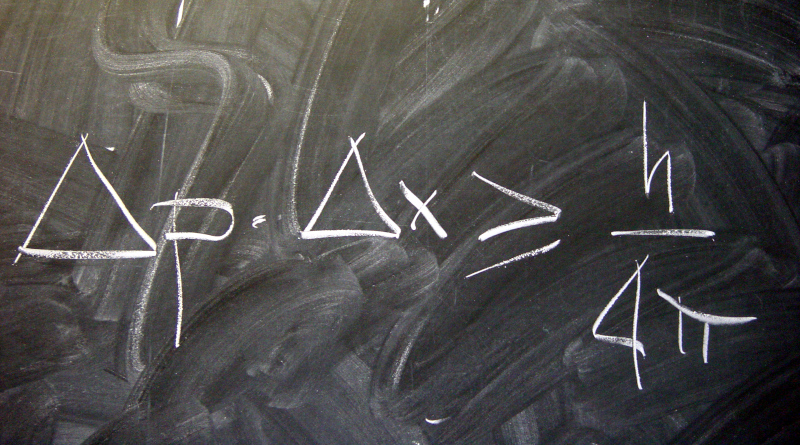 [In the image: Heisenberg’s uncertainty principle]

Schrödinger’s wave function, a basic pillar of quantum mechanics like Newton’s equations for the macroscopic world, has been the subject of numerous debates by the major philosophers of science of the last century. Its value has been conventionally indicated with the Greek letter ψ which calculates the probability that a quantum measurement has a particular outcome. Before the measurement, the state of the system is in a situation of “overlap” of all possible states: it is only after taking the measurement that the system “collapses” into a determined state.

This lends to two different interpretations: ontological and epistemological. For the ontological approach, ψ represents reality as it is, and the collapse of the wave function is nothing more than the natural evolution of the system as a result of the interaction with the surrounding environment. On the other hand, the epistemological view argues that ψ represents at most our limited knowledge of the state of the system and the collapse of the wave function is not a real physical process but the almost instantaneous updating of our knowledge on the state of the system. Therefore, it is our knowledge that seems to assume discontinuous modalities, not the current state of the quantum system.

Is the wave function objective reality or only subjective knowledge? Physicists, epistemologists and philosophers have long debated on this theme. In 1960, the theoretical physicist Eugene Wigner proposed that the observer’s consciousness is the dividing line that triggers the collapse of the wave function[1]  and this theory has been revived and developed over the last few years. “The rules of quantum mechanics are correct but there is only one system which may be treated with quantum mechanics, namely the entire material world. There exist external observers which cannot be treated within quantum mechanics, namely human (and perhaps animal) minds, which perform measurements on the brain causing wave function collapse” [2].

The British mathematician, physicist and philosopher of science Roger Penrose developed the hypothesis called Orch-OR (Orchestrated objective reduction) according to which consciousness originates from processes within neurons, rather than from connections between neurons (the conventional view). The mechanism is believed to be a quantum physics process called objective reduction that is orchestrated by the molecular structures of the microtubules of brain cells (making up the cytoskeleton of the cells themselves). Together with physician Stuart Hameroff, Penrose suggested a direct relationship between the quantum vibrations of microtubules and the formation of consciousness[3]. Penrose writes: “The evolution of conscious life on this planet is due to appropriate mutations having taken place at various times. These, presumably, are quantum events, so they would exist only in linearly superposed form until they finally led to the evolution of a conscious being—whose very existence depends on all the right mutations having ‘actually’ taken place! [4]“

Physics and mathematics have essentially showed us three distinct worlds: the microscopic world of particles, the visible one in which we live on this Earth and the cosmological world of great intergalactic distances. For each of these worlds, scientists have studied and elaborated formulas that describe their fundamental laws. Yet, despite the efforts, a unifying law that expresses its validity from quantum physics to cosmology has not yet been found and tested.

Therefore, the need to expand the boundaries beyond the limitations imposed by current methods of scientific research appears on the horizon, according to an approach that also takes into account other human disciplines that can integrate – with specific insights and knowledge – the models presented by physics and come to envision different levels of reality. In other words, it was felt the need for a transdisciplinary research that is able to integrate the “researcher” (man) within it by making the necessary connections.

This problem has led to the understanding that there are different paths of knowledge, that their different modalities are complementary and that they pertain to different levels of reality. The concept of “levels of reality” was introduced as the first fundamental axiom of transdisciplinarity by the theoretical physicist Basarab Nicolescu, President and founder of the International Center for Transdisciplinary Research (CIRET). Nicolescu writes: “There are, in Nature and in our knowledge of Nature, different levels of Reality and, correspondingly, different levels of perception […] The structure of the totality of levels of Reality or perception is a complex structure : every level is what it is because all the levels exist at the same time[5]”.

In our case, we can easily detect the three levels:

According to the common scientific approach, the physical laws that describe each level are valid only within the level itself, and not in the others. Yet the three levels exist simultaneously and those which appear as contradictions in one of the levels are no longer so in the other two.

The complexity of realities cannot be described by mathematical language alone. The mathematical language is mainly addressed to the analytical mind, while the symbolic language to the totality of the human being, with his thoughts, feelings and body. In quantum mechanics the particle is what it is only because all other particles exist: complexity is an essential feature of the world.

The passage from one level of Reality to another is governed by the logic of the included middle. With this term the Romanian philosopher Stephane Lupasco[6] indicates how the classical Aristotelian logic of the “tertium non datur” is to be critically reviewed in the light of a transdisciplinary view, especially following the discoveries of quantum physics. According to Heisenberg “in quantum theory this law «tertium non datur» is to be modified. […] It would be a self-contradiction to describe in natural language a logical scheme that does not apply to natural language. […] we have to admit that there are other possibilities which are in a strange way mixture of the two former possibilities[7]”.

Werner Heisenberg was the first to see the epistemological, ontological and methodological consequences of quantum physics, highlighting the two different aspects of reality that were delineated by the two concepts of “objective” and “subjective”. Heisenberg argued, however, that it would be a grave mistake to divide the world into a subjective reality and an objective reality, into a “real” world and a “spiritual” world. Quantum physics has shown us that we need to rethink the theses of classical science, such as the total separation between the subject and the object, the hypothesis that the material world is the only “real” world and the idea that science can develop independently of other sources of knowledge such as theology, philosophy, the arts and culture.

The coexistence of the quantum world and the macrophysical world has led to the upheaval of what had previously been considered mutually exclusive pairs of contradictions (A and non-A): wave and particle, continuity and discontinuity, separability and inseparability, local causality and global causality, symmetry and breaking symmetry, reversibility and irreversibility of time, etc.

The intellectual “scandal” caused by quantum mechanics consists in the fact that the generated pairs of contradictors are actually antagonistic only when they are analyzed through the interpretative filter of classical logic.

An example of what has just been asserted is the psychological phenomenon that Carl Gustav Jung called synchronicity: a link between two events which, although not causally connected to each other, occur simultaneously[8]. Although – at that time – physics was founded on the rigid axiom of cause and effect, Jung and physicist Wolfgang Pauli observed that any presumption of a causal link between synchronic events was absurd or inconceivable.

Non-causality, a principle that seems to have no reason to exist at our level of macrocosm, is one of the basic principles of entanglement in quantum reality. C. G. Jung and W. Pauli could never have delineated and described the phenomenon of synchronicity if each of the two had not dared to transcend the limits of their own disciplines, physics (Pauli) and psychoanalysis (Jung).

[3] R. Penrose, S. Hameroff, “Consciousness in the universe: A review of the ‘Orch OR’ theory” Physics of Life Reviews (Elsevier) -2014