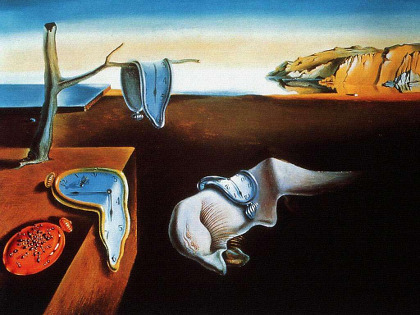 For centuries man has hunted, he brought the animals to pasture, cultivated fields and sailed the seas without any kind of tool to measure time. Back then, the time was not measured, but only estimated with vague approximation and its pace was enough to dictate the steps of the day and the life of man. Subsequently, for many centuries, hourglasses accompanied the civilization with the slow flow of their sand grains. About hourglasses, Ernst Junger writes in “Das Sanduhrbuch – 1954” (no English translation): “This small mountain, formed by all the moments lost that fell on each other, it could be understood as a comforting sign that the time disappears but does not fade. It grows in depth”.

For the philosophers of ancient Greece, the time was just a way to measure how things move in everyday life and in any case there was a clear distinction between “quantitative” time (Kronos) and “qualitative” time (Kairòs). According to Parmenides, time is guise, because its existence would imply the coming into being of the events, that is, an absurd change from their previous “not be” (what is future is not yet) to “being” (the present). There is only being.

Albert Einstein was the biggest supporter of the Parmenidean universe, with his theory of general relativity, in which all the reference systems are always present, at the same instant. “Time, said Einstein, is not at all what it seems. It does not flow in only one direction, and the future exists simultaneously with the past”.

It was Newton who, to build his physics, imagined the possibility of a huge empty space where time passes, even if there is nothing and nothing moves. Newton separated the time by the events of the world, imagining that the time passed anyway, regardless of everything else. To describe the evolution of physical phenomena, it was introduced into mathematics a linear and constantly growing representation of time, from a source (the Big Bang, 13 billion years ago) to the infinite future. Yet, time is also a rhythmic succession of phases in which the evolution of nature takes place, dictated by repeatable and still harmonic events within a imperturbable cyclicality.

In ancient Indian philosophy, as expounded in early texts such as the Vedas, the universe goes through repeated cycles of creation, destruction and rebirth. This led to a cyclic view of time, the so-called “wheel of time” or Kalachakra, in which there are repeating ages over the infinite life of the universe. The wheel of time concept is found in Buddhism, as well as in the traditions of the ancient Greek Orphics and Pythagoreans, but also in other religions such those of the Maya and the Indians of Arizona.

In physics, the unit of time (the second) is defined as 9,192,631,770 periods of the radiation corresponding to the transition between the two hyperfine levels of the ground state of the caesium 133 atom. Thus, by measuring a periodic event, we use a cyclical event.

While the space, heat, electricity, magnetism are variables which make themselves evident in nature – without any need for human intervention – how the time expresses itself? Its presence is manifested in the universe through cyclical phenomena such as the rotation of the planets, the stars, the evolution of a periodic wave or the simple rhythmic transition of the seasons. In other words: a breath, the breath of time.

There is no “right now” in the universe

Einstein pointed out to the world that inside the time interval of what we call “the past” and what we call “the future” there is something else that had never been seen until now. There is not only an ephemeral and fleeting moment of the “present”, but much more.

The reason that makes us overlook this interval is the fact that generally, in our daily lives, it takes very little and its duration depends on the space, the distance. If two people are talking in the same room, the interval “neither past nor future” is not noticed, since the duration is next to a few nanoseconds. During a telephone conversation between Rome and Sydney, it becomes more evident but still rather negligible.

If instead the communication takes place from New York to Mars, this mysterious “neither past nor future” has a duration of 13 minutes and thus becomes a detectable and substantial element of the experience. The communication will never be immediate because what one hear, was told 13 minutes before by the other. That is, there are 13 minutes in which the moment is “neither past nor future” for each speaker, because it is in a temporal limbo. According to physics, this phenomenon is extremely logical and simple to explain, but its consequences are very important: it means that there is no “right now” in the universe.

In other words, there is no single cosmic clock that marks the life of the universe. Every object in the universe has its running time, differently from each other. Physicists and philosophers came to the conclusion that the idea of this common present for the whole universe is an illusion and that considering time as a flowing stream is a generalization that is not working.

To put it as Martin Heidegger, man “inhabits the time“. However this “inhabiting” could only result from our still faded and blurred image of the world.

Time does not exist. The theory of loop quantum gravity

The last century was marked by the experimental confirmation of two of the most important theories of physics: general relativity and quantum mechanics. Yet these two jewels appear mutually incompatible and still fail to simultaneously represent the Universe: for general relativity the world is a curved space where everything is continuous, for quantum mechanics the world is represented by infinite discrete particles where energy quanta jumps.

A new theory (not yet experimentally confirmed) that would provide an opportunity to bring together these two gems is the “Loop Quantum Gravity“, whereof one of the leading figures is the Italian physicist Carlo Rovelli. It is a very complex theory but it holds surprising conclusions: the universe is not a continuous space but it consists of grains, i.e. tiny “atoms of space” that form a network of relationships which weaves the plot of the space itself. Rovelli writes: “The idea of continuous space containing things disappears, as well as also the idea of an elementary and primitive time flowing regardless of things. The equations describing grains of space and material no longer contain the time variable”.

There is no longer a line along which run the events, but the flow of time is internal to the world, it is born in the world and every process dances at its own pace, independently from the others.

If the theory of loop quantum gravity is correct, the illusion of a continuous space-time around us is just “the blurred vision of this dense swarm of elementary processes“.

Time flows differently for some of us, even though the man has deceptively wanted to codify a universal “measure” for everyone. Measurements have closed our emotions into inescapable virtual shells. You will definitely experienced, at the end of a particular day, to have the exact feeling that from that specific sunrise to that sunset you had spent much more time than the day before. Or the obvious difference that exists – in terms of the time perception – from a week spent in bed with the flu and one spent in an intensive work or leisure. When the days go by two alike, in looking back and remembering they all appear indistinguishable from each other and we can no longer measure them, there is no difference between one and the other, and the smallest defined unit of time is the day in its entirety: time seems therefore to have accelerated its pace. However we can remember every exact day of the week of intense events, even any hour of them, with specific references and very clear, so that we seem to be able to break up the time and every single moment in infinite particles, each worthy of their dignity: we slowed the inexorable flow of grains in the hourglass and we were able to appreciate every tiny element. Therefore, the facts and events are our organ of perception of the time flow. The more the content of these events is rich of interesting topics that meet and satisfy our soul, the more our hourglass will flow more slowly.

Einstein’s Secretary, Helen Dukas, once asked him a simple explanation of relativity to be used in response to constant requests from journalists. After some thought, the great scientist proposed this: «An hour sitting with a pretty girl on a park bench passes like a minute, but a minute sitting on a hot stove seems like an hour».

Time is one of our senses

Interestingly, the position of Sara Jacobovici in a recent article: time is one of our senses, along with sound, sight, touch, smell, and taste, and as such you can create your own personalized time management profile. The time is “perceived” by our body as well as the other senses perceive their feelings, and it becomes real to humans at the moment in which consciousness becomes aware of it.

Although time does not manifest itself directly associated with an obvious “sense organ”, it is now joint opinion of psychologists and neurologists that the human brain is equipped with a system that governs the perception of time, involving the cerebral cortex and cerebellum. Sara Jacobovici writes: «A commonly held definition of a “sense” is: “any system that consists of a group of sensory cell types that respond to an external stimulus and which corresponds to a particular group of regions within the brain where the signals are received and interpreted.” In this way, time is a sense».

But if time is a sense, so what’s the ‘sense’ of time?

4 pensieri riguardo “The Breath of Time”