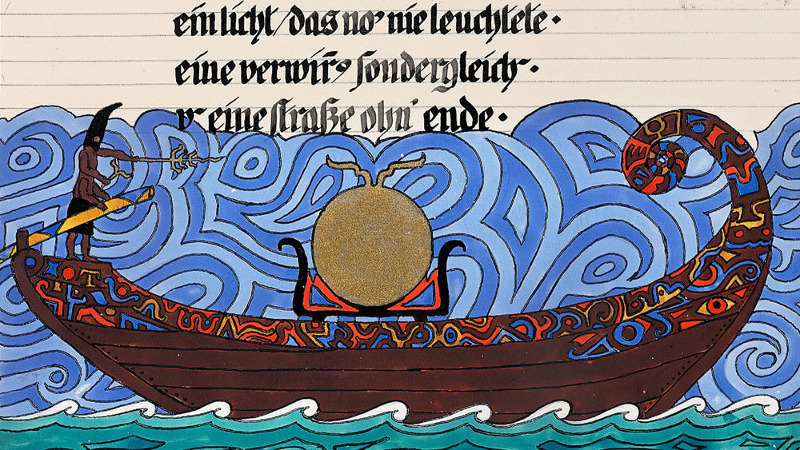 Children can use their imagination better than us because they are (still) immediately in contact with the Whole and they represent the most pristine prototype of the human being. From birth and for the first years of life, the child is the mirror of our species, who carries in himself the primary elements and the roots of evolution, without conditions or interference. When then education begins, especially school, his imagination is restrained and limited, everything is being done to concentrate his interests only for what is ‘real’ and to let him leave the world of fantasy. In the first drawing exercises to which the children are subjected at school, their imagination or the appearance of how they perceive some elements of nature are discarded; the drawing that best fit to a photographic vision of reality is rewarded, inhibiting their own imaginative potential from the very beginning, in favour of a more reassuring homologation.

This split of the most free and primary dimensions of the human mind from reality becomes even more evident in recent centuries of history of the Western world, as outlined by Giambattista Vico in his work “The New Science” (1744). The main concern of Vico was connected to the fact that the new theoretical address sponsored by the Scientific Revolution, was going to assume a self-referential absolute role: he feared that the new scientific method wanted to present itself as the only right way and not just as one of the many available methods, valid only in certain areas of interest. Vico precisely emphasized, beside the physical-mathematical and natural disciplines, the existence of those sciences that, from the end of 1600, some had begun to call in France “human sciences” (psychology, sociology, literature, politics and so on). He insisted on the existence of categories, procedures, criteria and methods “different” from those used in the natural sciences, yet with their validity and scientific aspect.

It is always enchanting and amazing when we are faced with digital images, moving scenes or pictures that we never imagined on our behalf. But the continuous and passive submission to this wonder does not allow the individual to deeply participate to the creative phenomenon of the imagination. The imaginative process requires active participation in the creation, so to reach that state where you pleasantly get lost in thought, that daydream that Gaston Bachelard calls “rêverie“.

It was the brilliance of Carl Gustav Jung to see the iconographic nature of human thought and understand that the image tells a universal story. According to Jung, in fact, imagination and intuition are really vital in all higher levels of science: even physics is based in a stunning intuition working through the imaginative potential. The vital root of Man, in other words, is strictly unconscious in nature.

In the second half of the last century, the great anthropologist and epistemologist Gilbert Durand was able to capture the vast revolution of our time, which was claiming the need to overcome the radical distinction between rational and imaginary knowledge. According to Durand, the man constantly uses his ability to overcome the simple symbolic ties of the animal through the spontaneous richness of the complex symbolic structures. Every thought is representation: the presentation of an inspiring image in the man is immediately surrounded by a procession of symbolic possibilities. The imagination of man is always symbolic (cf. G. Durand, L’imagination symbolique, 1964). It is this imagination that allows man a ransom from the oppression of its current situation, from the prison of pure mechanical factuality, allowing a glimpse of new possibilities of freedom and salvation.

A sense of addiction to neglect their own imaginative potential is induced in humans, caused by the indiscriminate use of the wrapping technology that surrounds them. Today there is no need to imagine, there are those who do it for us and there is always the device specifically built to avoid making use of intuition and intelligence. Television and the network have besieged us with ready-made images, “disposable” visual associations; for this reason – especially for the new generations – the use of their imaginative resources is often stifled and atrophied.

Yet modern man’s search for meaning is constant, albeit unconscious. The phenomena related to the spread of tattoos and piercing – for example – reveal a latent need for symbolic expression and tribal affiliation denoting the emergence of some of the main features of the human being. Very often the mark of a tattooed symbol on the skin is not accompanied by the deep knowledge of the meaning of the symbol itself, but yet something still pushes the person to witness his personal transcendental experience. And if you do not resort to tattooing, sometimes it is an object to keep with you, a tiny totem that takes the shape of a guiding-spirit to hold the minimum expectations of sense that modern society tries to deny at all times.

With the desecration of life and creation, modern man has “removed” the symbol from the dark areas of his psyche, that is, from the dream, the fantasy, the ancestral memories and imagination.

Only the imagination can lift us to a higher level, expand our horizons, and in doing so transform our view of events in every activity of our personal daily life or work. If we are inspired and sustained by imagination, the events do not appear as exclusively belonging to the physical plane and thus subject to the law of gravity and inertia, but they become events of the soul and as such they can be meditated, transfigured, transformed by the creative capacity of our intelligence.

When you open your mind to the impossible, sometimes you find the truth. And as already said by Heraclitus, “If you do not expect the unexpected, you will not find it; for it is closed to the research, and no way brings to it“.

Un pensiero su “Why children can use their imagination better than we do?”